Do you consider where your seafood comes from when you eat it? While ecosystems are complex, the math is straightforward. The amount of fish in the water decreases when more people fish more than the water can naturally replace.

Some people still do not realize that the supply of fish is not unlimited. This article tackles overfishing in Canada and its effect on its coast.

Overfishing is a major environmental issue in which too many fish get caught. It depletes the adult fish population. It leaves insufficient fish to spawn and replenish their numbers for them to remain sustainable.

Overfishing is fishing done aggressively. It depletes stock levels to the point where they can no longer support the required amount for harvest.

Overfishing is caused in part by global fishing fleets. These fleets are five times larger than what is required to catch fish that our seas can sustain. Most operational fishing fleets can cover at least four planets the size of earth on a global scale.

In addition to overcapacity, several fishing methods are making fish unsustainable. These tactics devastate ecosystems and wreak havoc on our marine life.

Bottom trawling is an example of this. It causes massive harm to non-target species due to its non-selective fishing approach and heavy gear use.

Bycatch contributes to overfishing. It occurs when the fishermen use large nets to catch larger fish. Larger fish and mammals, such as dolphins, sharks, sea lions, and porpoises, are frequently trapped in the nets.

Many of these magnificent species are made available for market bidding. Some fishermen dispose of them rather than being released back into their natural habitat.

Every year, more than 300,000 whales, dolphins, and porpoises die from fishing gear and nets. It is the world’s leading killer of these animals. If the animal survives in the fishing gear or fishing net, it suffers severe, life-threatening damage. If they can escape, they usually suffer from amputations and other consequences that lead to death.

Bycatch is employed to supply restaurants with fish. Other than that, overfishing harms humans and the labor market. Fishing is a top source of income for many people.

Fishing jobs will become scarcer as the fish population declines. It will cause individuals to lose their jobs and have to look for alternative labor.

Overfishing is evident in the winter skate, an endangered fish species. It’s a remarkable animal that uses a brief zap of electricity to dissuade predators and stun prey. The majority of them can live in the northwest Atlantic Ocean, from Canada’s Gulf of St. Lawrence to North Carolina’s coast.

Winter skate is being caught and processed into fishmeal and lobster bait, despite its reputation as a garbage fish. They’re even for sale as food for humans. Increased trawling for the species has led to young capture.

It has resulted in a dramatic decrease in the number of winter skaters. These variables, according to experts, are to blame for a 90 percent drop in mature people since the 1970s. The IUCN has classified the winter skate as critically endangered due to its rapid decrease.

Coastal locations are home to the top diversity of marine life. That’s because they have some incredible ecosystems where watery creatures live, including reefs, mangrove swamps, and kelp forests.

Humans enjoy the coastline as well. They are home to over 60% of the population.

Many bird species travel great distances to breed. They utilize the coastline to refuel before a long flight or to stop and eat along the trip.

Semipalmated sandpipers, for example, gorge themselves on the food-rich mudflats of Canada’s East Coast’s Bay of Fundy every August. Then they travel nonstop to South America for three or four days. Seals, sea lions, and other migratory animals that rely on healthy coastlines include:

Recent research on the consequences of overfishing in Canadian coastal communities points to increased earnings but less fish. Canada appears to be failing at ocean stewardship.

Canada exported $6 billion worth of fish and seafood goods in 2015. Canada’s fishery is struggling. The sector appears to be more concerned with earning a profit than ensuring sustainable catches for future generations.

Less than a quarter of fish stocks in Canada are considered healthy, and the status of nearly half of them is unclear. Overfishing and decades of bad management techniques have drastically decreased fish populations in Canadian coastal regions.

While the Canadian fishing industry is currently more profitable than ever, some drawbacks are surfacing. The analysis reveals that the $6 billion in exports was based on fictitious data and did not represent healthy fish stocks.

Canada’s fishery is becoming smaller and less diversified. Canada’s seafood industry is producing more money than ever before. However, this is dependent on a small number of shellfish species, including lobster, crab, shrimp, and scallops.

Coastal towns and the Canadian seafood industry are susceptible due to a lack of diversification. Communities may have little to fall back on if these stocks disappear.

Although the high value of lobster and other shellfish is excellent news, the seafood industry is dependent on a few vital species. And if their numbers decline, the enterprise will fail.

Only if governments around the world aggressively campaign for fishing laws will we be able to stop overfishing. For this to happen, governments must first accept that overfishing is a big issue.

Some government and private-sector efforts are in place. The Annual Catch Limits are the most effective. These are strict cap limitations anglers must follow.

The next stage is to safeguard fish throughout the reproductive season. When there is a restriction in fishing during the breeding season, the odds of filling the population gap improve dramatically.

We end up with something termed sustainable fishing as a result of combining such tactics. And this is our best opportunity to revive the ocean’s life.

Sustainable fishing attempts to ensure that marine life thrives rather than only survives. As a result, understanding the distinction is critical.

Species populations must not be on the verge of extinction since a pandemic might wipe out entire species. Humans are at the top of those who cause this wipeout.

Sustainable fishing ensures a healthy fish stock for today’s humans as well as future generations. Each year, we eliminate over 77 billion pounds of marine life from the ocean.

In these terrible times, we must explore ancient fishing methods from the Philippines or Polynesian societies. These places have different species of fish that some fishermen hunt in different seasons. Some of their ways ensure that all types of fish have enough time to reproduce.

Some academics believe that the world’s fish consumption should no longer experience reduction. And though this is possible to some extent, it may not be a viable choice. It necessitates the participation of all countries.

The Truth About Worldwide Overfishing

Overfishing has killed out 90% of the ocean’s top predators in just 55 years. Because humans are disturbing the balance of the oceanic food chain, this is an issue that requires attention.

Another issue with en masse fishing is that you don’t always get the fish you’re searching for in the fishing net. Other sorts of marine life also get caught in fishing nets.

Dolphins, for example, were frequently trapped in tuna fishing nets. Even if they throw back into the ocean all the untargeted fish, they may already be dead or on their way to death.

Some fishermen are now using a particular type of net that allows dolphins to escape. On tuna cans, you may have noticed a tag that reads Tuna Safe. The angler has used dolphin-safe nets.

In 1989, fishing enterprises all across the world harvested 90 metric tonnes of fish from the ocean. The rate of replenishing of fisheries has been constant since then. To put it another way, humans may have already pushed the oceans to their limits.

The oceans have a fine-tuning system, and our actions disrupt that balance. Overfishing has left an indelible imprint that continues to burn and bleed. It is past time for citizens and the government to take action and effect change. 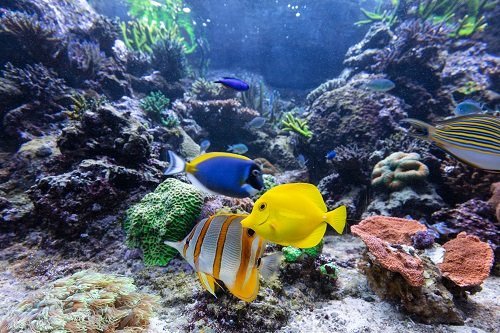